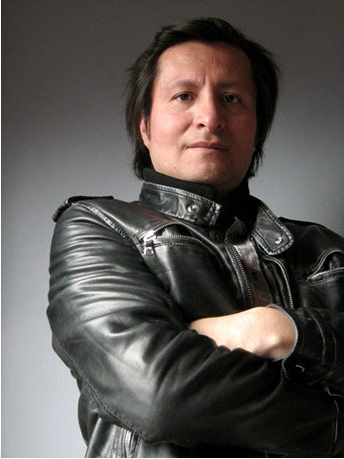 Octavio Pineda (Mexico City, 1972) is a journalist, writer and translator, his three main and most joyful trades. Formed as an industrial engineer – an interdisciplinary major that he exercised some time – he very soon let himself be seduced by the singing of sirens of literature, which keeps him captivated.

In 1996 he entered the school of Mexico’s General Writers Society (Sogem), where key clues about literature, dramaturgy, and journalism were revealed to him. Since then, he has focused on writing mainly short stories.

He performs as a journalist since 1998. Since 2002, he lives in Bogota, Colombia, where he has served as correspondent or contributor of Mexican media, such as the newspaper Reforma or the cultural and literary magazine Letras Libres, in addition to writing also for some Colombian media or blogs.

In 2009, he published his first book, Corte de Cuentas (Balance Sheet), a collection of stories and mini shorts. A second book of stories, Ay amor, ya no me quieras tanto (Oh darling, don’t love me so much), was launched digitally in 2012 and as ebook and printed book in 2016. In the IV La Cueva National Prize of Short Stories (2014-15), his story “La tercera raíz” (The third root) was one of the 13 finalists among 1,300 contestants, and it became the backbone of his third book, La tercera raíz y otros cuentos (The third root and other stories), published in 2017.

El libro de los viejos oficios (The book of old trades), his fourth book of short stories, was published in 2018. And Animal SOS Animal marks his entrance into a hybrid genre closer to poetry but still having much of storytelling.

And the singing of sirens of literature, to his own delight, has not yet released him.